RESOURCES: 85th Commemoration of the Holodomor in Ukraine 1932-1933

EDMONTON, Canada – No two days are the same in Vlodko Boychuk’s profession. He doesn’t log thousands of miles to glamorous destinations or swing from a trapeze, but his job is exciting in a different way. Boychuk is a teacher in a Ukrainian bilingual program, one of the oldest in western Canada.

For the last 44 years, the program has been promoting Ukrainian language and culture in the Canadian province of Alberta. There are currently more than 700 students enrolled in the Ukrainian bilingual program, which is offered in three school districts throughout the province, according to the Alberta Education Ministry.

One of the schools that supports the program is Archbishop Jordan Catholic High School in Sherwood Park just outside of Edmonton. In a building that more resembles a landmark piece of architecture than a school, Boychuk teaches grade 9-12 students who are learning Ukrainian as a second language.

When the Kyiv Post visited the school on Oct. 15, Boychuk was teaching Ukrainian Creative Arts for the nine-grade students.

As the class begins, Boychuk greets everybody in Ukrainian, the students reply enthusiastically. Some of them immediately ask whether they will be singing any Ukrainian songs today.

“It’s their favorite part of the class,” Boychuk says, laughing.

First things first, however. The students talk about themselves in Ukrainian, with occasional help from the teacher. Most of them already speak good enough to easily discuss things like their family traditions, hobbies and cuisine. When they start using English words, Boychuk softly reminds them to use Ukrainian equivalents.

Boychuk, who left Ukraine for Canada in 1990, holds a master’s degree in Ukrainian Folklore from the University of Alberta.

The majority of his students were born in Canada to Ukrainian and mixed families and have never been to Ukraine. They say they hope to visit it soon. So far, they have enjoyed field trips to the Ukrainian Cultural Heritage Village northeast of Edmonton.

After checking their homework – which was to watch and review Ukrainian music videos by popular singers and bands, including Ruslana, BoomBox, Druga Rika and others, Boychuk gets his guitar out of the case. It’s singing time. They start with their favorite one – Chervona Ruta (Red Rue), a popular Ukrainian song written by Volodymyr Ivasyuk in 1968. The song was never formally copyrighted and due to its wide popularity is often mistakenly considered a Ukrainian folk song.

“I believe that my students who are learning Ukrainian in Canada should be well versed in both traditional and modern aspects of Ukrainian culture and language,” Boychuk says.

But it’s not just music: Boychuk’s students also talk about politics, sports and current events during their Ukrainian classes.

Back in 2014, the students worked together on a project about the EuroMaidan Revolution, a 2013-2014 anti-government protest that ousted pro-Russian President Viktor Yanukovych. Their task was to learn as much as they could about what was happening in Ukraine.

Amber Zyla, one of Boychuk’s students, recalls she didn’t know much about the revolution at the time and it was “an eye-opener” for her to learn how it affected people and the whole country.

Boychuk says that his students are the main source of motivation for him. A few years ago, he was excited to see that one of his students could play guitar, and that motivated him to take guitar lessons as well. Now Boychuk can play about 60 modern and folk songs.

“That is way more than I can play on the piano or accordion, which are two instruments I mastered in my childhood,” he says. 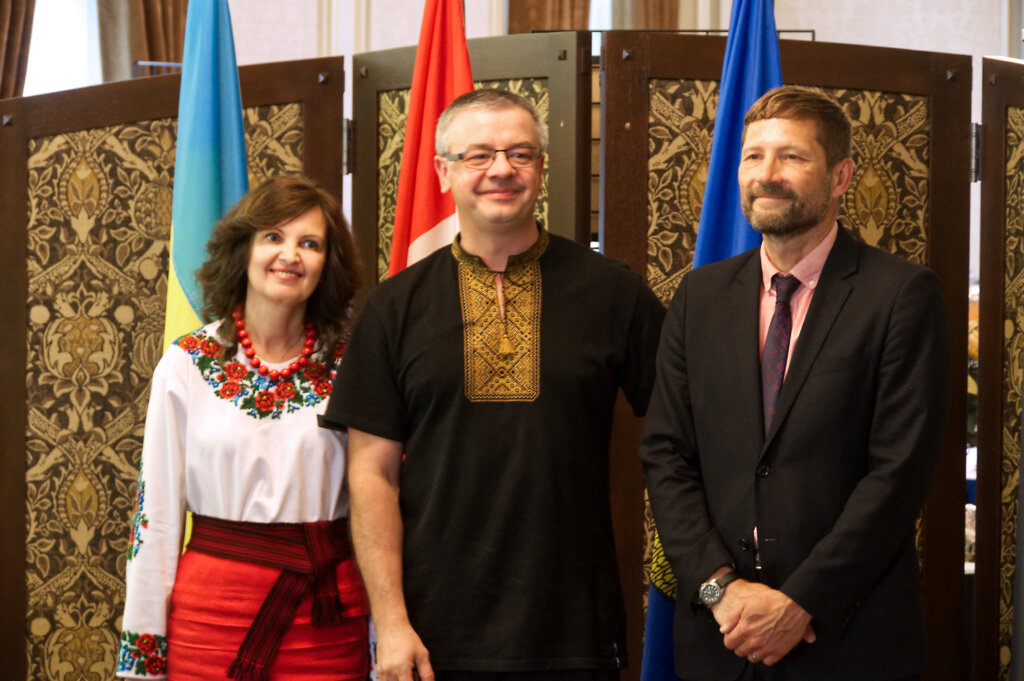 Nataliya Nayavko, a special language advisor for Ukrainian language and culture and Vlodko Boychuk (C), a teacher of Ukrainian Bilingual Program, pose with Waldemar Riemer, director of International Education Services with the Government of Alberta during the photo contest “Ukrainian Culture through the Lens of Students” in Edmonton, Canada. (Brad LaFoy)

One challenge the students of the bilingual program often face is to differentiate between the old and modern flavors of the Ukrainian language. As hundreds of Ukrainians immigrated to Canada in the 1890s and early 1900s, they brought not only their excellent farmers’ skills that were in great demand at the time, but also their own language which they have preserved for over a century.

The Ukrainian language in Canada has a number of distinctive features as compared to modern Ukrainian spoken in Ukraine. This is explained by the fact that after departing their homeland, there were relatively few opportunities to communicate with it, as Ukraine spent most of the 20th century as a part of the Soviet Union, with little connections to the outside world. Moreover, Ukrainian in Canada was heavily influenced by English and French over the years.

Boychuk embraces the challenge. He believes it is important for his students to know both the literary Ukrainian language and the local “older Ukrainian dialect” from western Canada.

“I’m getting my students ready to communicate with their distant cousins from contemporary Ukraine, but they also need to understand their grandparents who speak the archaic form of Ukrainian,” he explained.

While for many people Saturday is time to relax after the long week, for Boychuk it is different. Early in the morning, he drives to the other side of the town to teach at Ridna Shkola (Native School), a Saturday Ukrainian Heritage School that has been operating in the city for the last 60 years.

At Ridna Shkola, he works with fifth-grade students who are about 11 years old and mostly fluent in Ukrainian.

The school doesn’t duplicate the Ukrainian bilingual program and was not intended as a substitute for it. According to the school’s director Olga Myc (pronounced Muyts), it complements and enhances what the students learn in the bilingual program.

Myc, a native of Ivano-Frankivsk, became the school’s director in 2006. Since then, she saw hundreds of students graduating from the Saturday school with a deep appreciation of Ukrainian language.

“This is a chance for students to learn more every Saturday and be actively involved in a community,” she explained. “They learn through playing, singing Ukrainian songs, and learning about traditions.”

She’s actively involved with the students. Together with them, she sings Christmas carols helping her students to prepare for St. Nicolas Day concert.

“I love sharing the joy with them, it’s my favorite part of the job – to work with kids,” Myc said.

Currently, there are more than 100 children aged five to 12 enrolled. To get registered, future students have to complete grade one in the regular school system. The tuition fee is 275 Canadian dollars per year.

A Lviv native Lesia Mashchak is one of the seven teachers at Ridna Shkola. She has been teaching for 39 years, almost 20 of them in Canada.

“You can only work with children if you love them and love what you do,” she said with a warm smile watching her grade one students learn a new letter and practice its writing. Mashchak gives small presents to the students who master the new letter first.

The most difficult part, according to Mashchak, is “to spark love for the language” and keep its flame alight.

“You have to remember, these children study the whole week and then go to Ridna Shkola on Saturday to keep learning, you can’t push them hard, you have to find other ways to encourage them,” she said.

In Alberta, the Ukrainian language program includes bilingual programs, where in addition to Language Arts, Ukrainian is used for instruction in other subjects, such as health, art, music, physical education, up to a total of 50 percent of the school day, and Language and Culture courses. Ukrainian is studied as a subject to develop communication skills, intercultural and strategic competence and an appreciation of Ukrainian culture.

However, some 50 years ago Ukrainians living in the province didn’t even dream of such possibilities. It wasn’t until the Ukrainian Professional and Businessmen’s Club in Edmonton established a multicultural committee in January 1971 that this began to change. The committee addressed the federal and provincial governments, asking to make the Ukrainian language a course of study in schools where there was a demand.

Then-Premier of Alberta Harry Strom eagerly backed the proposal, but his government’s term ended the same year and he was never re-elected. The committee was unsure if the new government would support the project.

However, the new leadership of the province backed them and in 1973, the committee received an offer. Ukrainian would be established as a language of instruction alongside English in grades one to three in centrally located schools. The government also suggested to “appoint somebody of Ukrainian ethnocultural background working in the Department of Education,” and planned to have the pilot project in operation by September of 1974.

Over the past several years, the enrollment of students has changed from mainly Canadian born students of Ukrainian heritage (with limited Ukrainian language skills) to fluent speaking students coming from Ukraine, with Ukrainian as their first language.

According to Marian Butz-Gauk, the president of the Edmonton Catholic Schools Ukrainian Bilingual Parent Advisory Society, in the past, immigration of families was mainly from Western Ukraine, “but over the past few years, we are seeing families coming from Eastern and Central Ukraine.”

Alberta schools and their teachers also benefit from the expertise and assistance of Nataliya Nayavko who became a Special Language Advisor for Ukrainian Language and Culture in 2017, following an agreement between Alberta Education and the Department of Education and Science of Lviv Oblast State Administration in Ukraine.

This summer, she helped organize a photo contest “Ukrainian Culture Through the Lens of Students” that invited children of all ages from kindergarten to grade 12 enroll in the Ukrainian bilingual program to highlight the Ukrainian elements that influence their communities. 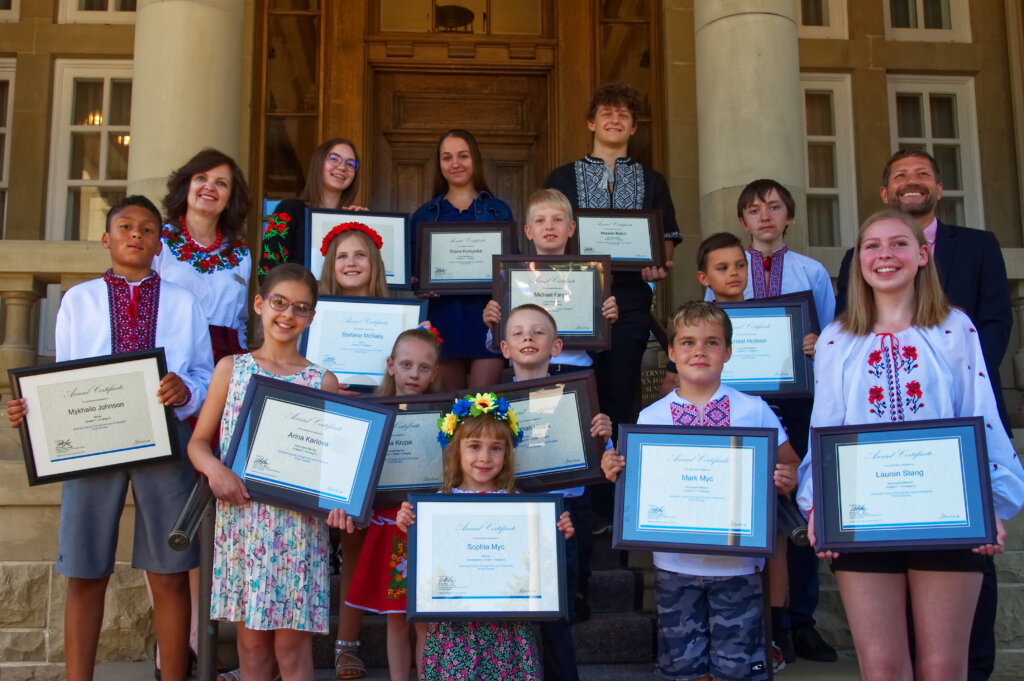 Organizers and participants of the photo contest “Ukrainian Culture through the Lens of Students” pose for a photo after the awarding ceremony in Edmonton, Canada. (Brad LaFoy)

According to the ministry, they received over 80 photos from 10 schools from across the province.

One of the participants, Arina Karlova, who relocated to Edmonton from Luhansk Oblast a few years ago, told the Kyiv Post she was excited to try her luck because she enjoys entering contests.

“My mom and I went to three different Ukrainian locations (in Edmonton) that we liked the best and took pictures of them,” she said. “On the one hand, it was difficult because you had to find a nice place for lighting, but on the other hand it was easy because I know a lot of cool Ukrainian places in Edmonton.”

Permanent link to this article: https://shkola.ucc.ca/2019/01/ukrainian-bilingual-program-going-strong-in-canadas-alberta-province/ 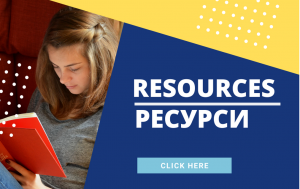 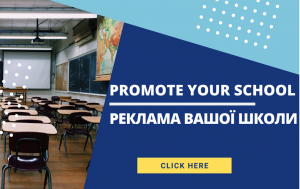